Done With the Bun!

This morning I did a picture hat for Tessie...

One problem.  The bun wouldn't fit inside. More about that later.

Here is the pattern.  I put the measurements on it, but again, if you can resize it in one of your programs It will come out more true to scale. 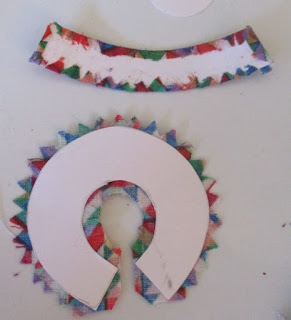 She insisted that she needed a hat to match the apron that she is wearing... I can see more hats to come...

There are a lot of ways to make hats.  This is just the way that I devised over 30 years ago and I am stuck in a rut.

I glue the fabric to one side of the cut out  cardstock pieces.  I cut many Vs in the edge of convex curves(outside).  Many slits in the concave(inside) side.

Next I glue all of the tabs around to the opposite side.  Let them dry a bit. 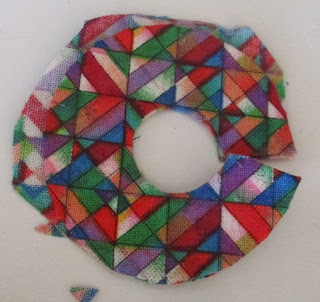 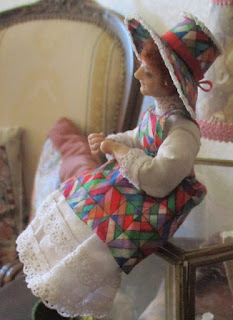 Then glue the lining to the inside of the cardstock over the tabs.  Trim the fabric even with the edge of the piece

Here is one partially trimmed.  The bottom side and the middle.

After that, I glue the crown piece together. A to A.  The brim, B to B.

Then I glue the crown to the brim.

I then cut a top piece to fit exactly over the top edge of the crown. Cover it the same way and glue it in place.

Go wild decorating it... Unless Tessie wants it plain.

There are two different brims pictured above.  The first one is the one on the hat.  It has a lot of curve.  The one in the above photo, that is half covered and cut, has a smaller piece  cut in the back and will be more flat.

Tessie preferred the first one.  And here she is.  She tried it on and couldn't get the bun in the crown.

To my astonishment, she grabbed a pair of my small, sharp scissors and started hacking at her bun.

I stopped her before she was totally bald... She hesitated and then thanked me for it.

This means that the afternoon will be spent giving Tessie a new hairdo. It's about time.  She has had this bun for over a year... Maybe even two.

Out with the old and in with the new.  She tried to talk me into giving her blond hair.  I talked her out of that.  No one would know her as a blond. Her only request...er.. Demand was that she could wear hats over her hairdo. I don't think that I like the sound of that...

I see a lot of hat making in my future.  At least she has a good start.  When we closed the hat shop and made it into a place for her to sew, she squirreled away all of the hats.

I have to admit that she does look nice in the ones that I just made... I do believe that I am going to make her sign a contract saying that she will wear every hat that she owns at least one day before she starts demanding new ones.  Maybe "Hat Mania" will wear off before she finishes wearing them all.

Back to being a beautician.  See you tomorrow.