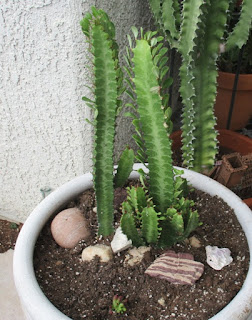 Yesterday, I bought a potted plant at Walmart.  It was a Euphorbia... Or I should say 5 Euphorbias...

See the larger one in the back?  That one alone was bought for about eight dollars, 15 years ago... I thought that it was outrageous at the time.  But I bought it because I really liked it.  It is now taller than I am.

Anyway, I thought that I was getting a deal on the big pot for fifteen dollars.  It looked like there were four plants in the pot.

I got it home and this morning when I unspotted it, I found that there were five good sized plants in the pot!

I planted two in a large pot.

I planted three out in the yard where the old Burbank cactus was.  I am hoping that they will survive in the ground here.

Now all I have to do is wait and see. 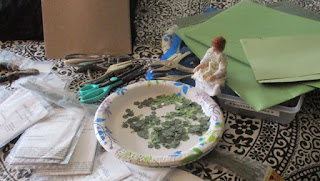 When I came back in the house, Tessie was sitting on the bed.  I asked her where the Skeleton Crew was... She huffed and she puffed and then she said, "If you ever put me in charge of that gang of ruffians again, I will leave home!

It seems that they got the better of her and she finally rounded them up and zapped them back into the basket.  She even sealed the lid with packing tape!

I have the feeling that we aren't going to be seeing them until the 30th of October after all. 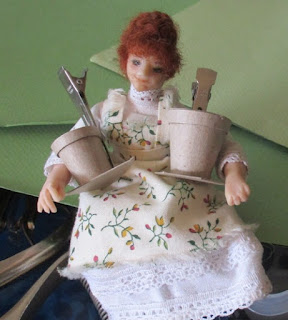 Meanwhile, I have been punching out leaves and making pots for her conservatory.

I felt sorry for her.  She did put up with the Crew for a good while.  I think that I owe her for taking care of them.

I am working on getting her conservatory up and running to make up for her time and trouble.

I would have locked them back in the basket way before she did.

Anyway, I tried making pots from cat food cardboard.  I think that they will be more realistic that cardstock.  They will be thicker. Now all I have to do is trim and paint... And make a few dozen more.  She wants a LOT of plants in the conservatory... And guess who is going to be making them?  That would be me.

See you tomorrow.
Posted by Caseymini at 2:39 PM