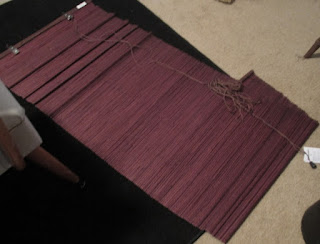 I did... I have been looking for these shades for a while now. I used to use the ones made of Luan mahogany.

They went out of style in the nineties... They are now making them of bamboo... They are very hard to find.  I found them today at Big Lots!

I only bought one, but I might just go back for more.  They come in several sizes...

I have used them for years for flooring... Easy.  Already stained a nice color.  Nice and flat.  Cut with scissors.

I also use them for half timbers on the inside and outside of buildings.  Very handy to have and much cheaper than mini wood. I paid $8.00 for a small one... That is 24" by 72".  They had wider ones.  Thirty six inches... but I am happy with this.  I would just have to cut the other ones up. 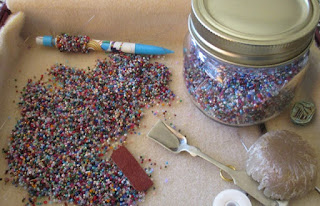 I was out most of the morning...

When I came back, I started messing with some little pencils that I bought at Dollar Tree.  Six in a pack.

This is a good way to use up bead soup(the stuff left over from a lot of beading projects).

Everybody that beads has some.  I am just doing free form peyote around the pencil to use up some of the beads.  Fun to do.  There are no rules.... 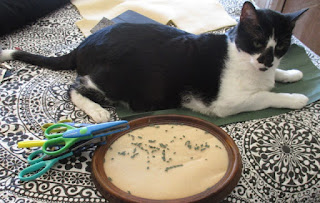 You may be asking, "Where are the minis?"

Kota is sitting on them!  I started messing around with cutting out some leaves with the fancy scissors this morning. He immediately jumped in to help... He is flattening the paper so that it will be easier to cut... The only problem is... It is hard to cut with him laying on it. He shows no signs of leaving either. 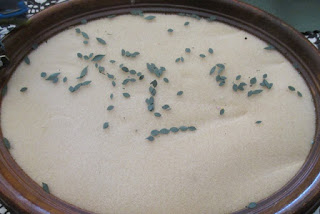 This is what I got cut before he decided to help.  I am going to have to forcibly remove him if I want to keep cutting.

So far, I have been able to keep him away from the beads.  Only things that he can lay on are fair game. Beads are lumpy...

Back to moving Kota.

Posted by Caseymini at 1:20 PM