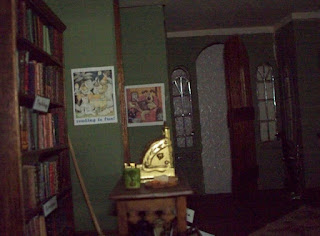 This morning, April and Amare came over.  Walter gave him an old camera that he no longer uses... Nice camera.

Amare is four.  He took to it like a duck takes to water and was thrilled.

The first two photos on here today are ones that Amare took... No help from us. 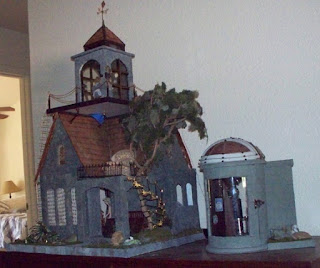 He was wandering around with the camera taking photos everywhere.  Walter showed him how to  use it.  Turn it on and off and he went to work.

This photo is as good as any that I have ever taken of Daisy's cottage.

I think that he has found his calling. 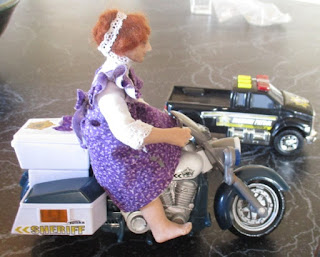 I am ashamed to show you the photos that I took.  This one of Tessie.  She stole Amare's  Sheriff's motorcycle and sped off as soon as she saw it.

Amare did manage to get it back before he left.  It was a struggle, but he did it. 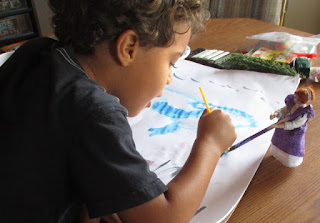 Earlier in the afternoon, we were all painting up a storm.  Amare and Tessie get along quite well... As long as they don't fight over who gets which toy.

Usually there are enough toys to go around.

I would say that today was a success.  We found a new photographer for the blog when he is here.  There aren't a lot of photographers that can say that they had photos published for world wide consumption when they were four!

Amare can! Keep up the good work, Amare! I love you!

I'm going back to work now.

Posted by Caseymini at 2:40 PM

Wow! I really am impressed. It's very unusual for a child so young to take pictures that are centered and in focus! Heck, I'm still cutting off the top of everyone's heads in my photos and I've got 60 years on him!

Marilyn, I did a small bit of cropping, but not much. He did better on focus than I do!

Awwww. Grandbaby love! He is adorable, and apparently like his grandma, multi-talented!

Hello Casey,
What kids are capable of is scary! He definitely has an eye for photography...I wonder where he gets the artistic flair ??? :)
Big hug
Giac

Many blessings going to you and your family, Casey; you are all such lovely people--both inside and out.

(I haven't commented much lately, but I read the blog every day)