Enough to Cover the World!

I was debating on what materials to use for rocks on the antique shop...

I looked at the supply of theater trays in the closet.  Tessie caught me looking... and she exclaimed, "You have enough of those things to cover the world!"

Not quite... I have enough to cover the whole antique store if I want to, but not the whole world.

Maybe I should use some of them just to clear out the closet a bit.  I didn't even carry any home from the movie yesterday... Actually, they were out of trays!  Maybe I have them all!

Just out of curiosity, I went and found what I have left of the air hardening clay that I use sometimes.

I have about two thirds of a package of that left also... 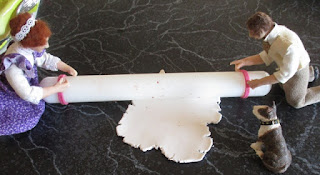 Tessie likes to play with that... before I could stop them, she and Zar started rolling out sheets of clay.

The roller that they are using is really for rolling fondant.  I got it at Walmart years ago.  It never gets used for food, but works wonders for clay of all sorts.  The little bands at the end of the roller make it so that everything that you roll turns out the same thickness. 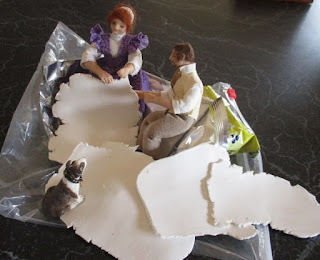 They got this far and I stopped them.  Now I have half a package left and they had fun.

I am now thinking that maybe I should use a combination of the two... Shallow rocks and foundation from the trays and heftier rocks from the clay.

At least I know that I have enough now.  I hate the decision making part.  Maybe I will let Zar and Tessie decide.

Tessie said that they would give it some thought, if I would make them some banana muffins to munch on whilst deciding... I knew that there would be a catch.   I guess I should go make muffins.  That's easier than decision making  by myself.

"Tessie, do you want them with nuts or without?"

Back to  the kitchen. See you tomorrow.

Posted by Caseymini at 2:42 PM