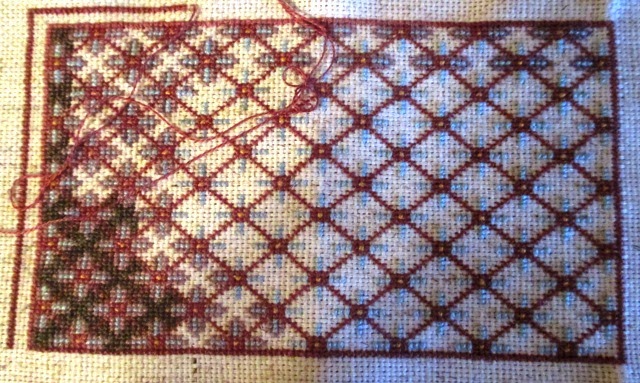 I found this start of a rug, yesterday.  I got quite a lot done on it yesterday and today.

It has never had a pattern.  I have been winging it from the start. 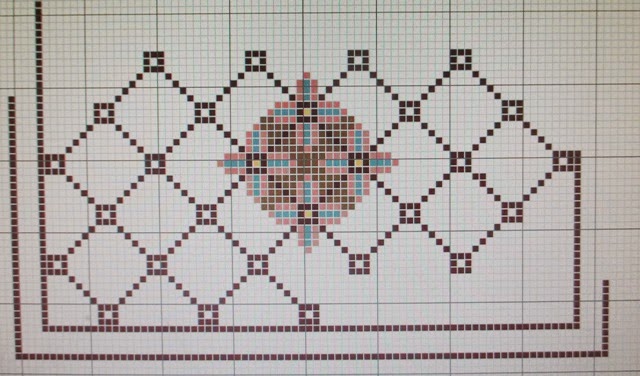 I decided to give you a clue as to how to go about this one.

I simply started with the dark colored diamonds.

Then I decided on the cross design coming out from the diamonds.  The last step was filling in the background and putting on a boarder.

I haven't decided on the border yet, but when I do, I will add it to the pattern so that you can do it too, if you wish.  The nice thing about this kind of rug is, you can make it as big or as small as you want, just by adding more diamonds. 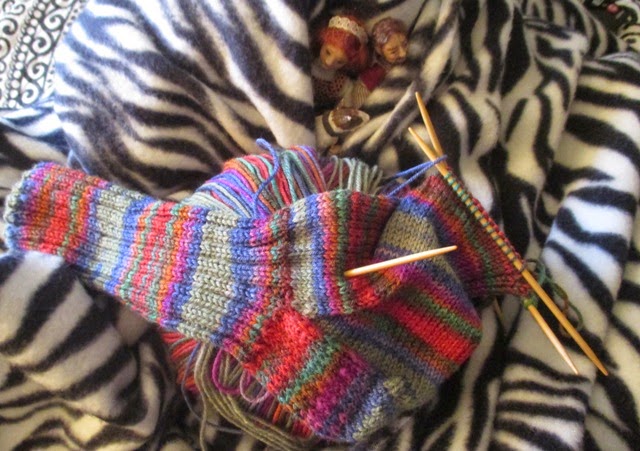 I did a bit on that and then switched to this.  It is exactly 32 degrees outside and it was 68 inside until I finally broke down and poked at the thermostat until the heater started coughing out a bit of warm air.

I think that the Terrible Two have the right idea.  I also think that Spike is smarter than both of them.  He snuggled down between them to share body heat...

I think that sock knitting will be better than working on cross stitch.  All that I have to do is wiggle my fingers.  Hmmmm maybe mittens wouldn't  hurt either.  I know that this isn't cold to some of you, but hey... I'm a desert rat!

Back to work.  See you tomorrow.
Posted by Caseymini at 9:18 AM

Hi Casey. That's an interesting way to needlepoint a rug. I'd like to try that idea someday.
Speaking of needlecrafts, did you knit socks for gifts this Christmas?
I'm working up to socks. I've done scarves and hats and am now on
mittens. So it seems to me that socks would be next.I did mittens with multi-patterning yarn.It takes some practice to have two items match.
Phyllisa

brrr stay warm Casey!
'tis the opposite here in Adelaide, S Australia. Was 43C 109.4F here today and there are fires burning in grass and some houses and being fought valiantly as I type. We can smell it from here near the city centre.
Your rug looks great- thanks for sharing the pattern.
It sure seems like sock knitting weather over there. I love the colours in them.

I feel your pain, Casey. We're sitting at 39 degrees here in the middle of Texas and I'm freezing! I am not built for this at all lol. Stay warm!

Mittens for everybody! I was appalled at 32 degrees here in Phoenix, and my cat suddenly is much fonder of me.

The rug is, nonetheless, cool.

In my apartment during the winter,68 would be cold! I love that pic of the Terrible Two and Spike. It makes me want to go and get under my warm duvet and just drift off to dreamland! I can't always sleep, though! That can be a problem when we get older! Hopefully tonight will be good! I just never know!