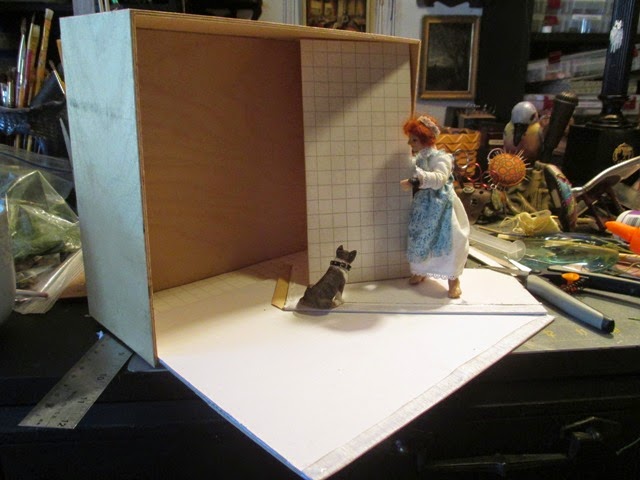 I want to say, first of all, I had nothing to do with this!

It was all Tessie's idea.

I heard a lot of loud noises coming from the workroom this morning.

When I went to see what was happening, I was floored!  Tessie found an unused, 8"by 10" box, some illustration board and the wallpaper drawer... The paper was scattered all over the floor and how she used the spray glue without sticking herself to a wall, I will never know.

She cut pieces of illustration board.  One to fit the back of the room, then one for the floor.  That fit flush against the back piece and even with the front edge.  Then she cut side pieces that would fit on top of the floor and flush with the back wall...

By the time I got there, it was too late to stop her.  She was well on her way to finishing those pieces with spray glue on the flat sides and paper wrapped around the front edges to cover.

I demanded, "Tessie!  What are you doing?"  Dumb question... She answered with, "I am making a place to hang the new plant hanger.". 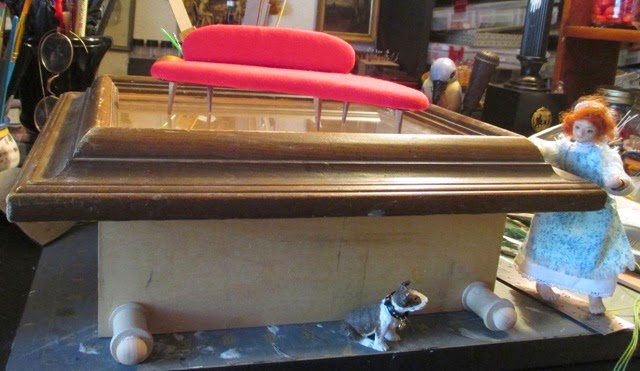 By this time, I figured, "If you can't beat them, join them...".  That was her and Spike.  He seemed to be giving encouragement and directions...

So... I went and hunted up a picture frame to fit the front...The only one that I could find was one that really didn't match what she wanted to do.

Her take on things was, "This will never do.  I need something modern.  I am going to put my mod couch in here and a couple of end tables and a TV and you will have to do a painting to hang on the back wall."  And as she plopped the red couch on the glass, she continued, "You will have to go to the store and find me something more suitable. Maybe something silver or black.".

"You're the one with the big people money!". A logical answer... 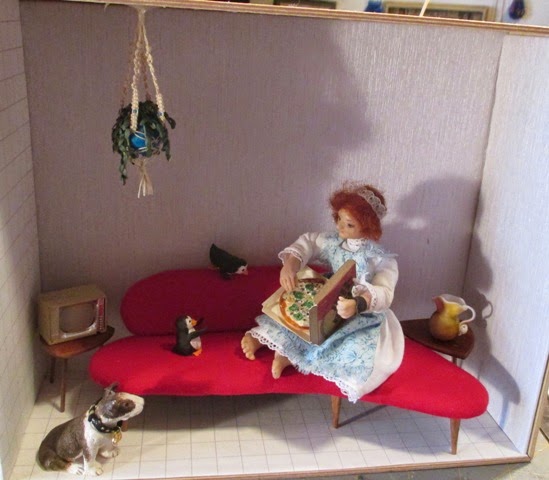 Then she had me take the old frame away and proceeded to set up a place to put her hanging  plant...

Of course, as soon as she brought in the pizza, she had company.  That is the penguins' favorite food.  Right after Oreo cookies.

Spike also joined the party... I don't think that anybody else was invited.  Too many guests, spoil the pizza... Not enough to go around.

I guess that, if I don't want trouble, I will be making a trip to Walmart later, for a cheap frame. Don't tell Tessie where I got it.  I dropped the names of a couple of high end furniture stores when she mentioned the new frame.  She will never know the difference...I hope.

See you tomorrow.
Posted by Caseymini at 9:55 AM

Lucille, that's one that I designed and made back in 2010.
http://caseymini.blogspot.com/2010/08/get-your-big-feet-off-of-sofa.html

I love the red sofa and tables!