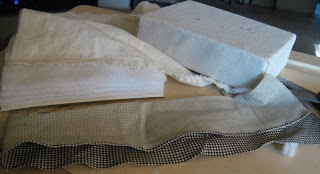 Bed making 1o1....I decided to work on the bed this morning. Everything in the bedroom end of the trailer is done except for the floor now.

This is my usual way of bed making. It all started with a class from Judee Williamson way back in the early 80s. She is a great teacher and I learned a lot from her. Since then I have changed a lot of the methods though.

I had a bed block already to go. It consists of three layers of acoustical ceiling 4 1/2" by 6" glued together like a layer cake. That is covered with muslin. That keeps the tile from shredding on the edges.

I then cut a piece of illustration board the same size and glued four layers of low loft batting to that. Go easy on the glue. It only has to hold together until you cover that with muslin or cotton for the bottom sheet.

Next, I cut out some strips of index card that were 3/4" wide and a little less that the height of the bed. These form the pleats.

I cut a piece of cotton fabric twice as long as the strip of pleats that I wanted to go around three sides of the bed. I turned under a hem with white glue.

Then I glued the strips of card vertically along the bottom edge of the strip, with the width of one of the strips between them. The uncovered part of the cotton forms the inverted pleats.

Lay it face down on your work surface. put a line of glue on the sides of two of the pieces of card. Force them together and press down on the tunnel of fabric that forms between the two.(center of photo) Each side gets glued down to the cards. When they are flipped over, they should look like the pleats on the left of the photo.

Next I glue the pleats to the sides of the bed and fold the top part without the card down over the top and glue. Then the muslin covered mattress is glued on top of that. 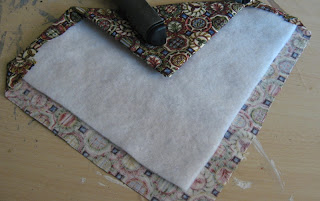 For the quilt, I covered a piece of the low loft batting with a piece of fabric that was about 3/4" extra all around. I lightly glued the edges to the back as a form of basting. I didn't line the quilt because the bed will be permanently made.

I then did a pattern of french knots all over the top to quilt. Then I cut a piece of muslin for the folded portion of the top sheet. 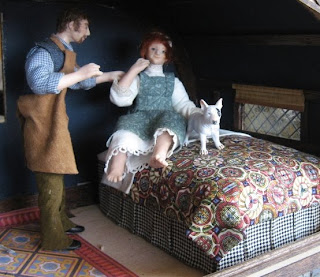 There are more details in other entries, under the "bed tutorial" section.

I didn't get to the pillows or the bookcase headboard yet. That comes next.

As you can see, I finished the inside of the window and put up a rolling blind.

Meanwhile, Tessie crowded in and tried it out. She says that Zar has nothing to worry about. She pronounced the bed a failure and stupid.....

Her exact words were....."The bed's too high and the ceiling is too low! How can anybody be expected to stand up and bounce on a bed when they hit their head every time they jump? Dumb bed!!!"

Oh well. That solves the problem of her trying to talk Zar out of the trailer. If she can't bounce on a bed, the whole domicile is worthless in her eyes.

Back to work. I have to make the most of my time. The next three days, Walter is in Detroit. Wednesday night I will be frantically cleaning up the mess, but until then minis, here we come!!!

See you tomorrow.
Posted by Caseymini at 10:55 AM

Boy, Casey, you've been busy! I absolutely love the fabric combination you picked for the bed. The window blind I like also. It does not hide the beauty of your window.

Casey, Thank you for the details about dressing the bed(and making it too). I missed a workshop a few years back to make a bed like this and always wondered how it was done using the ceiling tiles!

So a nice tutorial! And I was thinking, that a bed could only be made with a wooden structure... thank you!

Pretty pleats. Thanks for sharing how to make them. :D Can't wait to see the bookcase headboard.

Sounds like a fun three days ahead! I love it when I have a few days to myself to work on projects or do whatever I fancy. Lucky you!
Jennifer

Nice bed. Now I know why you've been so busy.