I went on strike this morning. I am taking the day off from cleaning the workroom....I know that is a bad thing to do, but I just wanted to do something else....Anything else. 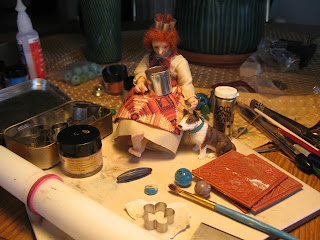 Beads and poly clay were easy to access and easy to put back when done, so they were my weapon of choice. Tessie needs things for the workshop.

I grabbed a box of shape cutters and the usual tools. All I used was a big block of white glitter Fimo that I accidentally purchased, not noticing the work glitter....I may never use it all at this rate. It is huge, but in this case, the color didn't matter.

I decided to do some bottles, formed over beads and then to color them with opalescent powders. 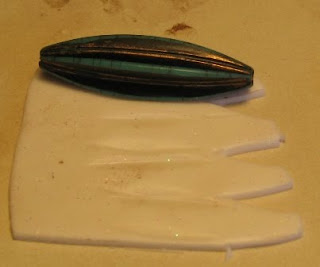 It doesn't make a difference what shape of bead you use, as long as it pleases you.

This was one of the odd ones that I have had laying around for years.

First I rolled out the clay with the Walton rolling pin. It is one that they put out for fondant work. I like it better than the acrylic roller that I have because it has two sets of bands that fit on either end to make the clay all the same thickness. In this case I was using the one that measures 1/16".

I cut the sheet the right size to fit around the bead and on one end I cut out V shapes to get rid of some of the excess clay. The other end I left as is, so that I would have excess clay to play with for the top of the bottle. 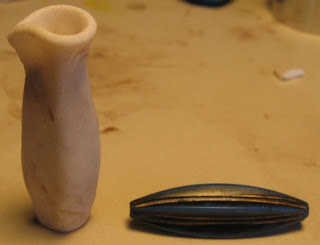 As I formed the clay around the bead, I kept standing it up to make sure that it was level.

I smoothed the surface working from bottom to top, so that the extra clay made a rough top flair.

After I did that, I pressed a rubber stamp into the sides and did some more shaping on the top.

I rolled a teardrop shape for the stopper.

Last, I used a small brush to cover it with the powder. 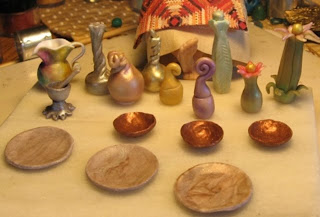 From left to right on the back row.....The pitcher was the only one done with alcohol ink dropped onto the slab and smeared.

Next, the twisted one was a flat bead. I brought up the clay and pinched it into the center. Then I twisted the neck and covered with powder.

The pink one was a marble. I simply covered it, and twisted the neck into a knot.

The next is another twisted one,with a stopper on top.

The two with the snail tops were rolled out into a long snake and coiled. They don't actually open(they could). There is simply an indentation scored around them to look like a top and bottom.

The aqua one is the one that you saw in the first photos.

The last two are made the same way, but I cut little Vs out of the top edge and flared them to look like a flower. The center of the flower is a stopper. I scored the sides of the last one and put an extra layer of petals at the bottom.

The top of the mortar and pestle was formed over the end of a pen and pried off. The bottom was made separately and glued on with liquid Fimo. The pestle is just a little rope with one thick end.

The three copper bowls were formed over a very rough bead. They were still made with the white clay and then copper powder was brushed on.

The plates down front were rolled out and cut with a circle cutter. This was the scrap clay from the rest. 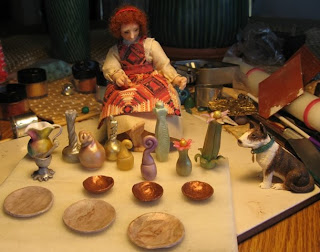 I used every bit of the clay that I rolled out! No waste this time!

Tessie is gloating because, I went back to work on her stuff. Zar is off somewhere pouting....

I am a happy camper and may even go back and finish the fourth wall, now that I have had a break.

See you tomorrow.
Posted by Caseymini at 10:24 AM

Casey- they are wonderful! I need some bottles for a swap I am working on- I am going to "borrow" your ideas! I love how the powder makes them look- Tessie must be thrilled!

That little pitcher is gorgeous! Really looks like porcelain! I also love the ones with the flowers and the plates in the front. They look like they were made of wood!
Great job Casey!

Go for it Kim. I will be interested to see what you come up with.

Kathi, I like the pitcher too. I am going to have to experiment with the alcohol ink some more. I only have three colors right now. I think the thing that makes it look like porcelain is that the inside of the pitcher is white, just like a real one would be.

I loved all bottles but the pitcher, for me... was wonderful.
Thanks Casey.
Elis

What a good idea, thank you for the tutorial, the result is great.
Geneviève

I'm cleaning/de-stashing/organizing my studio too and know what you mean about needing a break from all the cleaning and such!