This morning I worked up a prototype for Tessie's sewing box in miniature. I thought that you might like to try it sometime. 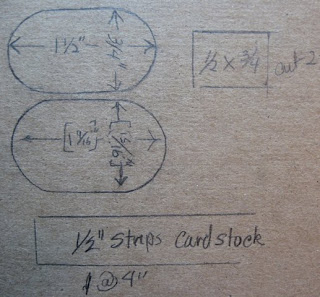 I did it with my handy cat food cardboard and some scrap booking card stock in the same color. I knew that they would both take Minwax wood stain. I used Aileen's Fast Grab glue to hold it together. If you can't get it to hold it's shape while drying, try sticking a couple of pins in it here and there until the glue is dry. Twist the pins to remove them. Don't try to pull them straight out of the cardboard.

At the left you see the measurements. You could make them larger or smaller. The main thing is making the top and bottom about a 16th of an inch larger than the inner bottom. You need a ledge for the bent sides to sit on and be glued against.

The side could also be taller or shorter. I did it from card stock in a strip that was 1/2" and it took less than 4" to go around and overlap a bit. I trimmed it to size as I glued. 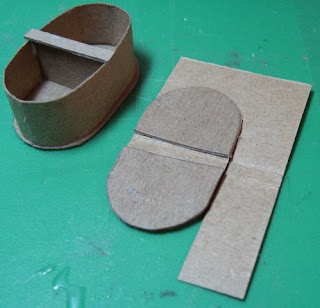 Those are glued back to back and then glued into the center of the box to make a place to set the cross bar. That is how the original is also done.

Here you can see what the body looks like glued together.

I cut the top lid into three pieces. The center piece is 1/8". I made sure that the whole thing fit on top properly. Then I folded a piece of card stock with a 1/8 gap in the center, kind of like the spine of a book. I creased it well so that it would fold up and down with ease. The whole thing gets flipped over so that the cardboard is on the under side of the lid when it is glued in place.
Then I glued the two end pieces to either side of the spine and let them dry.

I cut it out to match the curve of the outer lid. Then I carefully glued the center of the card stock to the center brace of the box. 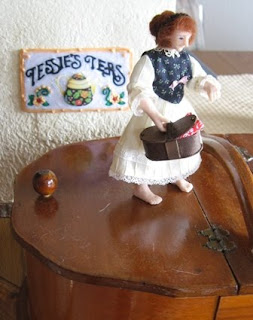 After I had it all assembled and the glue was dry, I stained it with Minwax wood stain. I used what I had. It doesn't match the stain on the original.
I glued a #11 bead to either side flap for knobs.
It still needs to be varnished to make it shine. Unfortunately Tessie grabbed it before I could do that and,as usual, the first word out of her mouth was, "Mine!"
No "Hello.". No "How are you?". Just "Mine!"
It's just another normal day in Tessie's world.
I am going to have to hunt up some veneer and do a proper bent wood box soon. I was to anxious to wait. This has been boiling around in my brain since Tessie got the big basket.
Now that I know it can be done, I may just try a few other versions. It could be done with fancy printed cardstock maybe. Do let me know if you try it. I would love to see the results.
Tessie is rummaging around in the Rusty Needle Quilt Shop. I had better go keep her from ransacking the place. Gotta run!
See you tomorrow.

THank you for the new tut. tessie is happy and I am too. Hugs Rosanna

Gorgeous! I was actually thinking the same thing: make a small one for Tessie to get her out of your own :)
Thanks for the tutorial!

it turned out wonderful Casey! I think that this will be my project of the week for next week- I'll let you know when I post pictures of my finished attempt :)

What a really nice box! I wish I can see it better although I am sure it looks exactly like the life size one.

Great idea. Didn't know that card stock would take stain. Might have to try this?
My conservatory arrived today so I'm going to be busy for a while. :)

Both sewing boxes look great! Think you sould make Tessie a mini Tessie to ride around in hers and annoy her? ;-)

Love the sewing box - I definitely want to try it!