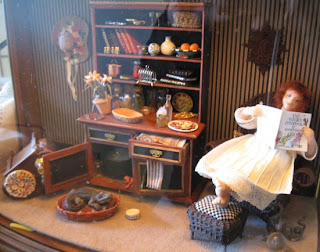 It has been decided. After some discussion, Tessie is moving into the cottage. She is Esmirelda's younger sister. She has been living in a glass fronted case for some time. She was never very happy there. Neither was her pet alligator, Friskie. He was forever whipping his tail around and knocking the sewing table over on it's face.
There was a bit of a tight squeeze when she tried to push her kitchen sideboard through the back door. With a little help from her friends, she managed it. There were only inches(1/4") to spare between the top and the ceiling! 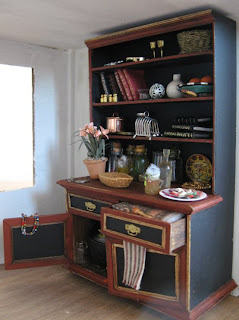 We went around gathering up the things that she will need to be comfortable in her new digs. She is taking all of her furniture from the previous abode and adding lots of new stuff. She is opening her own business as a speciality potion maker. She won't be in competition with Esmirelda because they only sell commercially made potions and ingredients at the Witches' Warehouse.
She insisted that a potbellied stove would be large enough to do the concocting of her potions. I am going to try to talk her into the larger model. When business picks up, I am sure that she will be glad that I did.....We are still in discussion on which it is to be.
She is growing her own herbs. She has a nice start on a pot of day lilies. I am not sure about the batch of bug beer that she brewed before she left the old place. I noticed that there is a worm crawling out of the mug....We are going to have to have a talk about sanitation. She insists that it adds to the flavor. 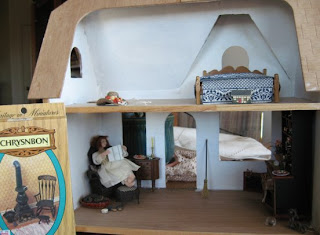 She dragged out the first bed that I ever made and witched it into the upstairs part of the cottage. It is nice and lumpy. I sometimes question her taste in furniture and food.
As soon as she can find a nail she will hang her hat, the one on the floor of the bed loft. To quote her, anywhere I hang that hat is home. It is a spring loaded witch's hat. She twists the red poppy and the black pointy part pops up.
I think that she is over anxous and rushing things a bit. I kept trying to explain that I still had a lot to do before it is "move in" ready. Her reply was......"You will have to work around ME!" 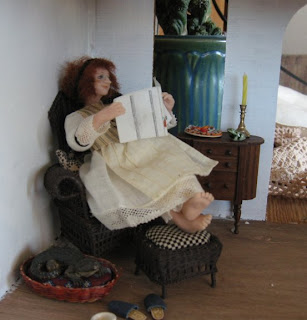 So here she sits, reading her copy of "The Witches' Handbook" by Malcolm Byrd. And I am about to start "Working Around HER". This should be interesting and fun.
See you tomorrow! That's if I am still sane.....No whispering behind my back. I can hear you!
Posted by Caseymini at 10:24 AM

LOL Casey. Brilliant can't wait to see the antic's you two get up to.
Make sure you visit my blog Monday, I'm having a little Competition cause its my Birthday...
Mini Hugs

Poore you. have to work arounde that women.
She looks a little bit mad.
Mini hugs

Ah-ha, now I finally found where Tessie came from!