Good Afternoon. Sorry to be late, but I have been making curtains for the bookshop. I had a small scrap of the fabric that made the cushion for the bay window. I got it into my head that the bay should have curtains to match. Then I decided that the window over the counter needed one too. 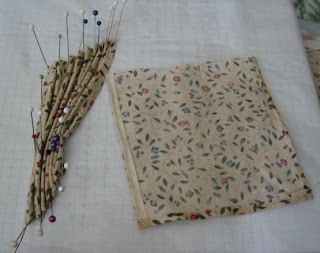 I make curtains with a similar method to the one that I made the bed skirt in the bed tutorial a while back.
This time I had to stretch a bit, literally. The bay has a slanted top. It is 6" tall at the peak. I had just a tiny problem.......I only had enough fabric for curtains that were 5" long. Oops! The answer to the problem was making the curtains look natural. If you pull the center of a curtain back to the side the bottom naturally slants upwards. Sneaky aren't I? Here you see my 5" by 4" piece of fabric. Beside it you see a longer curtain. Magic? Sure it is. Fabric stretches on the bias, so I simply did just that. I started with two pieces of fabric, each the width of the window. They should have been the length of the center. One inch short. I started at the outer edge of the curtain pinning it in three places, top, bottom and in the center where I wanted the tie to be when I finished.
On graph paper I usually simply put a pin in and slide it straight over from the half inch mark to the quarter inch mark. That forms the stand up pleat. This time I slid it to the side and up each time. At the top the curtains had to cover two inches of width. I pinned the inner edge of the top an inch above the outer edge and two inches over. This showed me where I would ultimately end.
If you try this method it helps to draw the window that you are working with on the graph paper and make sure you draw a floor line below and a 1/2" above for the top to cover the whole window. 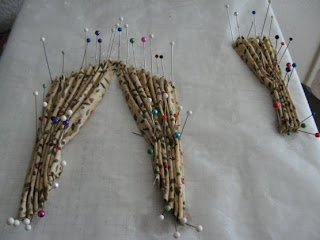 I have been using this method for a long time so I pretty much know what I am doing. I had never done the slant trick before tho. As you can see in the photo, it looks like it's going to work.
The window over the counter is only 1 1/2" wide so I decided on a single panel for that one. Again, I cut the fabric twice the width of the window and long enough to cover the top and bottom. On all of the curtains I allowed a 1/4" turn under on the sides and bottom. I don't have to worry about the top. That won't show when I am done.
After I have all of the parts pinned I sprayed the whole thing with heavy duty industrial strength hair spray. If I can get it, I use the odorless kind. I didn't have any. This stuff(I won't mention the brand because the company might come and spray me with a big bottle of it) could kill if you inhaled more than a few breaths. I either take it out on the back patio or into the closed bathroom to dry. 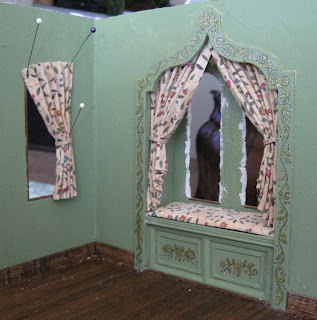 After it was dried and didn't smell like chemical waste anymore I took all of the pins out. I stuck a bit of glue on it where I wanted the tiebacks to go and put them in place. Then I simply ran glue along the outside edges and stuck them in place.
I stuck the other curtain up with pins so that you could see where it will be. I still need to make a valence for the top. I imagine that I should stick to the program and make it match the edge around the bay.
I still need to do the actual windows too. Those will be easy enough to install. I will do them on a board and then just slap them in place with glue.
Oh! By the way, I have two pieces of fabric left. They are both less than 2" square. Now I have to think of something to do with the scraps from the scrap. No pillows tho. Too matchy, matchy.
See you tomorrow.
Posted by Caseymini at 4:06 PM

The curtain looks great. Thank you, I will have to try this method soon. I`ve made the sandals from your tutorial.You can see them in my blog.

Love it! I just want to climb into that window seat and take a nap! That cutout shape would work nicely for a harem scene, too.